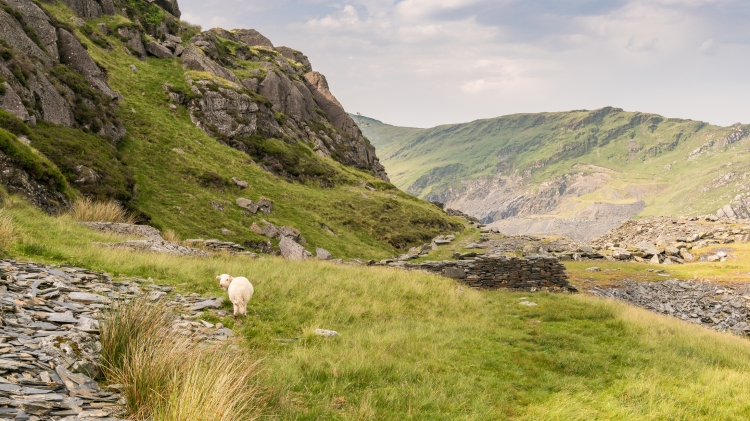 The little cinema was packed,
even if fictional, films about the locality were rare.
And later, in the bar there was much discussion.
The shots of the sheep blocking the road were appreciated.
Well, our sheep were famous for their techniques of blockade.
This was no fiction.
There was insider knowledge here!
It was the mass action that was shown.
It brought the occupants out of their cars
to wave their arms and shout in angry frustration.
But the individual acts of defiance by escapees
were not shown.
This was considered regrettable.
It was felt the film should have acknowledged the action
of a single ewe lying nonchalantly chewing
on the tarmac while the cars stopped
and drivers moved rapidly from
“awww cute sheep” to louder and more frantic hooting
and then to arm waving and shouting outside,
There was no discrimination, after all.
Old cars, new cars, large cars, small,
the ewe would eyeball them all impassively.
Locals just drove round her.

But the main discussion centred on the two elderly sisters
who lived up the mountain.
They drove a very old car.
One of them had learned to drive in the War
and no one had thought to check if she still held a licence.
But, no matter,
she could still drive well enough
even though blind.
Her sister could see fine.
And even though she could not drive
she was adept at giving instructions.
Well, it was only fiction!
Or was it?
The audience doubted it.
All could almost remember these women,
or similar ones.
More insider knowledge was suspected
as they argued happily
about the identities of the eccentric drivers.

PHOTO: A sheep in front of slate mine, Gwynedd, Wales. Photo by Bernard Brueggermann, used by permission.

NOTE: Blaenau Ffestiniog is a town in Gwynedd, Wales, created to support workers in the local slate mines. The workforce for these quarries came from nearby towns and villages such as Ffestiniog and Maentwrog, and workers’ houses were built near the quarries. After reaching a population of 12,000 at the peak of the slate industry, the figure fell with the decreased demand for the area’s slate. Today, the population stands at around 5,000. Tourism has become the town’s largest employer. The Ffestiniog Railway and the Llechwedd Slate Caverns are popular tourist attractions, as is the Antur Stiniog downhill mountain biking centre. Recent attractions include the Zip World Titan zip-line site, which also now features the Bounce Below slate mine activity centre.

NOTE FROM THE NATIONAL GALLERY: After the invasion of Poland on September 3, 1939, Britain declared war on Germany. In the summer of 1940, the outlook seemed bleak for the Allies in mainland Europe. The British army had been forced into retreat at Dunkirk, while France and the Low Countries fell to Germany. The invasion of Britain looked imminent, so a plan was needed to protect the national art collection. The Manod mine in North Wales was a perfect hiding place. Explosives were used to enlarge the entrance to accommodate the largest paintings and several small brick bungalows were built within the caverns to protect the paintings from variations in humidity and temperature. Special “elephant cases” were constructed to safely transport the paintings on trucks to Wales. By the summer of 1941, the National Gallery’s entire collection was in its new subterranean home, where it remained for four years. The collection was returned to The National Gallery, London during 1945.

PHOTO: Paintings from The National Gallery, London were stored in the Manod mine in North Wales from 1941-1945 to protect them from Nazi bombing raids during WWII.

NOTE FROM THE AUTHOR: The poem was inspired by local reaction to the film Framed (2009), which was set in Blaenau Ffestiniog. The film was based on the 2006 children’s book Framed by Frank Cottrell Boyce. The book and film were inspired the true story of the removal of paintings from the National Gallery, London for safe storage in one of the chambers of the old Bwlch slate mine during the bombings of World War II.

PHOTO: The author in 1983 outside the entrance to the slate mine with one of the wagons used to transport the paintings in and out of the mines.

ABOUT THE AUTHOR: Lynn White lives in North Wales. Her work is influenced by issues of social justice and events, places and people she has known or imagined. She is especially interested in exploring the boundaries of dream, fantasy, and reality. She was shortlisted in the Theatre Cloud “War Poetry for Today” competition and has been nominated for a Pushcart Prize and a Rhysling Award. Her poetry has appeared in many publications, including Apogee, Firewords, Capsule Stories, Light Journal, and So It Goes. Find Lynn at lynnwhitepoetry.blogspot.com and on Facebook.

One thought on “It’s Only Make Believe? by Lynn White”