Considering the Void
by Jimmy Carter

When I behold the charm
of evening skies, their lulling endurance;
the patterns of stars with names
of bears and dogs, a swan, a virgin;
other planets that the Voyager showed
were like and so unlike our own,
with all their diverse moons,
bright discs, weird rings, and cratered faces;
comets with their streaming tails
bent by pressure from our sun;
the skyscape of our Milky Way
holding in its shimmering disc
an infinity of suns
(or say a thousand billion);
knowing there are holes of darkness
gulping mass and even light,
knowing that this galaxy of ours
is one of multitudes
in what we call the heavens,
it troubles me. It troubles me.

NOTE: “Considering the Void” appears in Jimmy Carter’s poetry collection Always a Reckoning and Other Poems (1994). Listen to Jimmy Carter recite his poem at youtube.com. 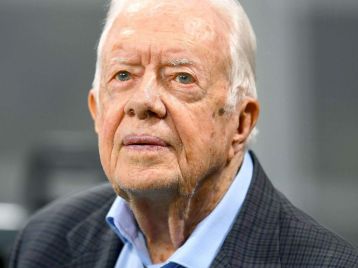 ABOUT THE AUTHOR: James Earl Carter Jr. (born October 1, 1924) is an American politician, philanthropist, and former farmer who served as the 39th president of the United States from 1977 to 1981. A member of the Democratic Party, he previously served as a Georgia State Senator from 1963 to 1967 and as the 76th governor of Georgia from 1971 to 1975. Since leaving the presidency, Carter has remained engaged in political and social projects as a private citizen. In 2002, he was awarded the Nobel Peace Prize for his work in co-founding the Carter Center, which he established in 1982 to promote and expand human rights.  He has traveled extensively to conduct peace negotiations, monitor elections, and advance disease prevention and eradication in developing nations. Carter is considered a key figure in the Habitat for Humanity charity. He has written over 30 books, ranging from political memoirs to poetry, while continuing to actively comment on ongoing American and global affairs. The earliest-serving of the five living U.S. presidents, Carter is the longest-lived president, the longest-retired president, the first to live 40 years after his inauguration, and the first to live beyond the age of 95.

One thought on “Considering the Void by Jimmy Carter”