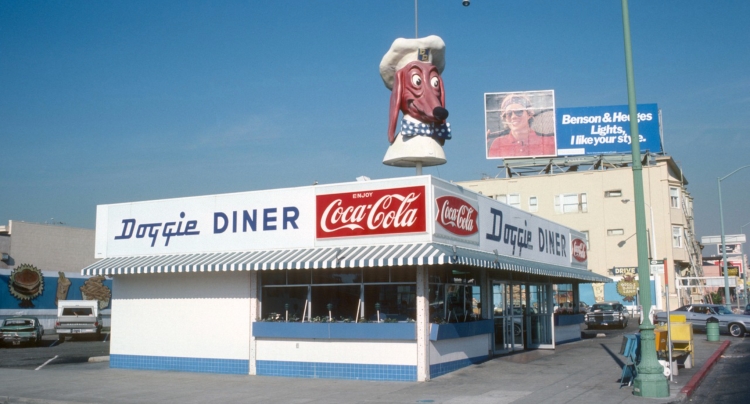 It smelled like hog heaven, grease-laden air,
scents of amber-gold fries and sizzling thick
burgers, the sharp tang of cole slaw vinegar.
We ordered dogs slathered in chili with pickles

and mustard. The world was copacetic. Above
the diner, the Dog slowly turned, glowing like love.

NOTE FROM THE AUTHOR: The Doggie Diner is the iconic San Francisco restaurant chain, open from 1948 to 1986. Since it’s now gone, the Doggie Diner is a pleasant, nostalgic memory for anyone who grew up in The City during those years. Each diner had a sign rotating above the building, a huge grinning dog’s head in a bow tie and chef’s hat. In the documentary Doggie Diner History, someone who lived near a Doggie Diner as a child recalls how the dog head “helped me navigate my way home, like a big doggie-shaped lighthouse.” A 1985 photo by Roy Kaltschmidt titled “Doggie Diner — San Francisco Zoo,” captures this warm sentiment.¶ In the poem, I try to convey this sunny aura along with the optimistic tenor of the ’60s, the feeling among the young that everything and anything was possible. Remember that San Francisco’s Haight-Ashbury district was the epicenter of the Hippie movement. Although that positive ambience pervades the poem, I allude to the Vietnam war, even though it’s not really present to the teenaged couple: I use the phrase “the world,” which was what American soldiers in Vietnam called America. There was “the ’Nam” and there was “the world,” a romanticized paradise. So, although the speaker and his girlfriend feel all is “copacetic,” it’s really not, and they will soon, very soon, grow up into a world of harsh realities. But for now, in the “now” of the poem, life is wonderful. Happiness is a spicy chili dog, and the Doggie Diner is a kind of heaven.

PHOTO: The author’s senior photo in his high school yearbook.

ABOUT THE AUTHOR: Vince Gotera is a Professor of English at the University of Northern Iowa, where he served as Editor of the North American Review (2000-2016). He was also Editor of Star*Line, the print journal of the Science Fiction and Fantasy Poetry Association (2017-2020). His poetry collections include Dragonfly, Ghost Wars, Fighting Kite, The Coolest Month, and the upcoming Pacific Crossing. Recent poems appeared in the journals Abyss & Apex, Altered Reality Magazine, Crab Orchard Review, Dreams & Nightmares, Ekphrastic Review, Philippines Graphic (Philippines), Rosebud, Stone Canoe, and the anthologies Multiverse (UK) and Hay(na)ku 15. He blogs at The Man with the Blue Guitar.