Some slow evenings when the light hangs late and stubborn in the sky,
gives itself up to darkness slowly and deliberately, slow cloud after slow cloud,
slowness enters me like something familiar,
and it feels like going home.

It’s all there in the disappearing light:
all the evenings of slow sky and slow loving, slow boats on sluggish bayous;
the thick-middled trees with the slow-sounding names—oak, mimosa, pecan, magnolia;
the slow tree sap that sticks in your hair when you lie with the trees;
and the maple syrup and pancakes and grits, the butter melting
slowly into and down the sides like sweat between breasts of sloe-eyed strippers;
and the slow-throated blues that floats over the city like fog;
and the weeping, the willows, the cut onions, the cayenne, the slow-cooking beans with marrow-thick gravy;
and all the mint juleps drunk so slowly on all the slow southern porches,
the bourbon and sugar and mint going down warm and brown, syrup and slow;
and all the ice cubes melting in all the iced teas,
all the slow-faced people sitting in all the slowly rocking rockers;
and the crabs and the shrimp and crawfish, the hard shells
slowly and deliberately and lovingly removed, the delicate flesh
slowly sucked out of heads and legs and tails;
and the slow lips that eat and drink and love and speak
that slow luxurious language, savoring each word like a long-missed lover;
and the slow-moving nuns, the black habits dragging the swollen ground;
and the slow river that cradles it all, and the chicory coffee
that cuts through it all, slow-boiled and black as dirt;
and the slow dreams and the slow-healing wounds and the slow smoke of it all
slipping out, ballooning into the sky—slow, deliberate, and magnificent.

NOTE: In 2021, Mardi Gras falls on Tuesday, February 16—and, due to the Covid-19 pandemic, is closed to its usual revelry of parades and mass celebration in New Orleans, so residents are turning their homes into floats. Mardi Gras, also known as Shrove Tuesday, refers to events of the Carnival celebration, beginning in early January on or after Epiphany (Three Kings Day) and culminating on Mardi Gras—the day before Ash Wednesday, the first day of Lent. “Mardi Gras” is French for “Fat Tuesday,” reflecting the last night of eating rich, fatty foods before the sacrifices and fasting of the Lenten season. A number of traditionally ethnic French U.S. cities, including New Orleans, have notable celebrations. Mardi Gras arrived in North America as a French Catholic tradition with the Le Moyne brothers, Pierre Le Moyne d’Iberville and Jean-Baptiste Le Moyne de Bienville, in the late 17th century, when King Louis XIV sent the pair to defend France’s claim on the territory of Louisiane, which included what are now the U.S. states of Alabama, Mississippi, Louisiana, and part of eastern Texas. Laissez les bons temps rouler! 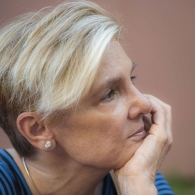 ABOUT THE AUTHOR: A native of New Orleans, Louisiana, Sheryl St. Germain has taught creative writing at the University of Texas at Dallas, the University of Louisiana at Lafayette, Knox College, and Iowa State University. Her work has received two NEA Fellowships, an NEH Fellowship, the Dobie-Paisano Fellowship, the Ki Davis Award from the Aspen Writers Foundation, and the William Faulkner Award for the personal essay.  St. Germain’s books of poetry include Going Home (1989), The Mask of Medusa (1987), How Heavy the Breath of God (1994), Making Bread at Midnight (1995), The Journals of Scheherazade (1996), and Let it Be a Dark Roux: New and Selected Poems (2007). She has also published a chapbook of translations of the Cajun poet Jean Arceneaux, Je Suis Cadien (1994).  She is also the author of a memoir about growing up in Louisiana, Swamp Songs: the Making of an Unruly Woman (2003), and she co-edited, with Margaret Whitford, Between Song and Story: Essays for the Twenty-First Century (2011), and with Sarah Shotland Words Without Walls: Writers on Violence, Addiction and Incarceration. St. Germain’s book also include Navigating Disaster: Sixteen Essays of Love and a Poem of Despair (2012), The Small Door of Your Death (2018), and Fifty Miles: Essays (2020).  She directs the MFA program in creative writing at Chatham University and is co-founder of the Words Without Walls program. She lives in Pittsburgh, Pennsylvania. Visit her at sheryl-stgermain.com.