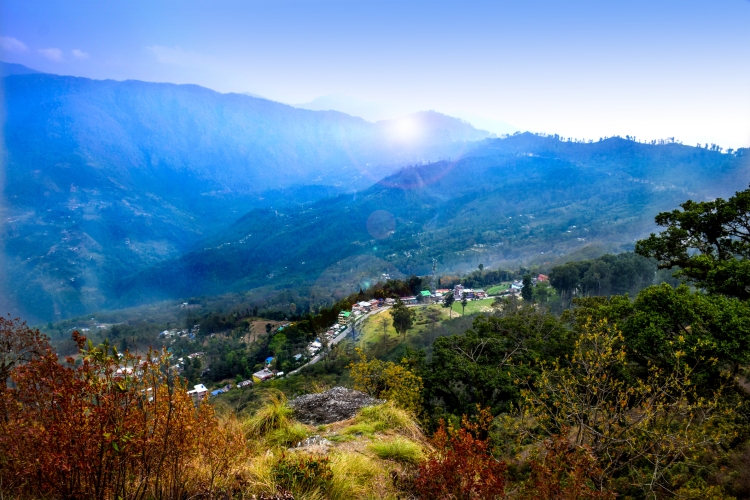 Kalimpong With Mother and Father
by Amrita Valan

It was the bedrock June of my nineteenth year
Traveling by train to Kalimpong, peaceful pristine
Poor cousin of crowded Darjeeling.

Stayed at an old Colonial guesthouse, a charming
Red roofed bungalow of deep cream. Dark
Polished wooden floors and red tiles in the front.
A breath of fresh morning, Kanchenjunga. With tea
And hot buttered toast. Mother’s face unlined itself
As she took on the glow of radiance borrowing
Sunrise on Kanchenjunga.
Me, I watched both in wonder as I fed the obligatory
Guest house pet golden spaniel, bits of buttered bread.
Then long winding uphill walks till breath came in rasps.
Turn around and run downhill like a little girl
Mother following sedate.
I reach the red wrought iron gates of Anne Villa
Lovely British legacy of cool summers spent on
Hill stations, a rhythm of the forgotten past
Recalled. Like the melody of my parents poem
Which stopped midway. As ma did now. And
Much later, leaving father a widower. But now,
She paused to let my tall shawl-clad father catch
Up with her.
Haze of morning mist playing still on their faces
End of journey and destinations unknown, in my
Sweet temporal travelogue.

PHOTO: View of Pedong in Kalimpong district of West Bengal, India. The town is located on a ridge that offers a panoramic view of Kanchenujunga and the Himalayas. Photo by Sonali Basu Routh, used by permission.

NOTE: Kalimpong is a town and a municipality in the Indian state of West Bengal. The municipality sits on a ridge overlooking the Teesta River and is a tourist destination owing to its temperate climate, natural environment, and proximity to popular tourist locations in the region.  West Bengal borders Bangladesh to the east, and Nepal and Bhutan to the north.

ABOUT THE AUTHOR: Amrita Valan holds a master’s degree in English literature, and has written over a thousand poems on love, spirituality, family, religion, current affairs, and human rights. She has also written short stories, rhymes, and tales for children. Published in several anthologies, 18 of her poems were recently featured in online zines. She lives in India, and is the mother of two boys.

3 thoughts on “Kalimpong With Mother and Father by Amrita Valan”