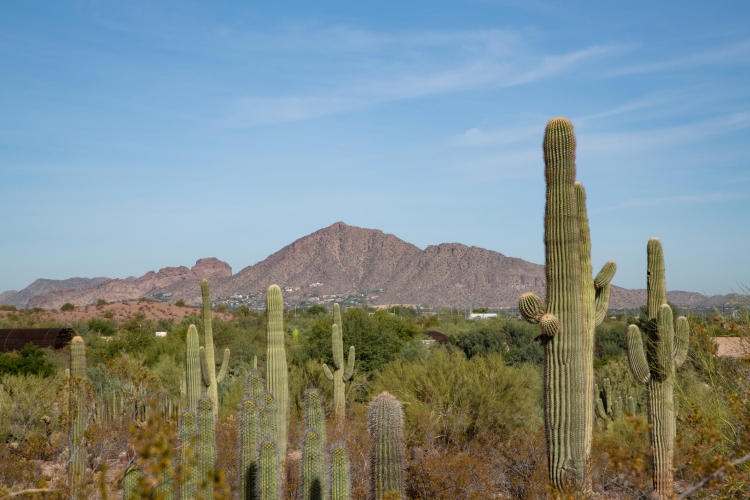 Sunday, seven a.m.,
before the unbearable heat.
This six-lane highway almost empty,
the double line down the center
white as bone.
I am running toward the small lake
near my mother’s condo,
pumping my body clean
with air and speed
and coursing blood.

To the west, Camelback Mountain
pushes up out of the ground,
double humped.
At the hospital
Mother lies in her
new, astonished state—
an open-eyed still life
of woman and machine.

Across the lake, a few small boats
float in the morning calm,
barely leaving a wake.
Close to the water’s edge
a duck waddles toward me
with her fantail of young.
I have remembered my offering of oats
and, both palms extended,
drop to my knees. 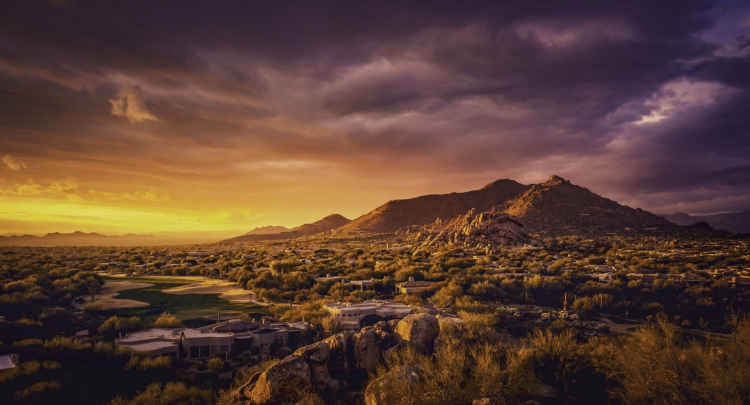 NOTE: Camelback Mountain, a prominent landmark of the Phoenix, Arizona, metropolitan area, is a popular recreation destination for hiking and rock climbing. The name is derived from its shape, which resembles the hump and head of a kneeling camel. The mountain is composed of a geologic unconformity between two separate rock formations. The higher part of the peak is Precambrian granite (ca. 1.5 billion years old). The head of the camel is predominantly red sedimentary sandstone from the Chattian stage of the Oligocene epoch (ca. 25 million years old).

PHOTO: Scottsdale, Arizona, desert landscape at sunset, with Camelback Mountain in the background. Photo by Artisan, used by permission.

NOTE FROM THE AUTHOR: I was staying in Scottsdale while my mother was ill and in the hospital. I was very worried about her, of course, and this anxiety seemed to infect my entire body. Only by running hard and sweating hard could I externalize it. Then, at the end of the run I was rewarded by the sight of the cool water and by the duck and her ducklings.  Feeding them gave me a brief moment of pleasure, before I turned around and ran back to shower and go to the hospital for visiting hours.

ABOUT THE AUTHOR: Rafaella Del Bourgo’s writing has appeared in journals such as Nimrod, The Jewish Women’s Literary Annual, The Adroit Journal, The Green Hills Literary Lantern, Caveat Lector, Puerto Del Sol, Rattle, Oberon, Spillway, and The Bitter Oleander. She has won many awards, including the Lullwater Prize for Poetry in 2003, and in 2006 the Helen Pappas Prize in Poetry and the New River Poets Award. In 2007, 2008, and 2013, she won first place in the Maggi Meyer Poetry Competition. The League of Minnesota Poets awarded her first place in 2009.  In 2010, she won the Alan Ginsberg Poetry Award and the Grandmother Earth Poetry Prize. She was awarded the Paumanok Prize for Poetry in 2012, and then won first place in the 2013 Northern Colorado Writers’ Poetry Contest. Finally, she won the Mudfish Poetry Prize for 2017. Her collection I Am Not Kissing You  was published by Small Poetry Press in 2003, and her chapbook, Inexplicable Business: Poems Domestic and Wild, was published in 2014 by Finishing Line Press. In 2012, she was one of 10 poets included in the anthology Chapter & Verse: Poems of Jewish Identity. She has traveled the world and lived in Tasmania and Hawaii.  She recently retired from teaching college-level English classes, and resides in Berkeley, California, with her husband and one spoiled cat.