The Catfish
by David Bottoms

From a traffic jam on St. Simons bridge
I watched a fisherman break down his rod,
take bait-bucket in hand, and throw
to the pavement a catfish too small to keep.
As he walked to his car at the end of the bridge,
the fish jumped like a crippled frog, stopped
and sucked hard, straining to gill air.
Mud gathered on the belly. Sun dried the scaleless back.

I took a beach towel from the back seat
and opened the car door, walked to the curb
where the catfish swimming on the sidewalk
lay like a document on evolution.
I picked it up in the towel
and watched the quiver of its pre-crawling,
felt the whiskers groping in the darkness of the alien light,
then threw it high above the concrete railing
back to the current of our breathable past. 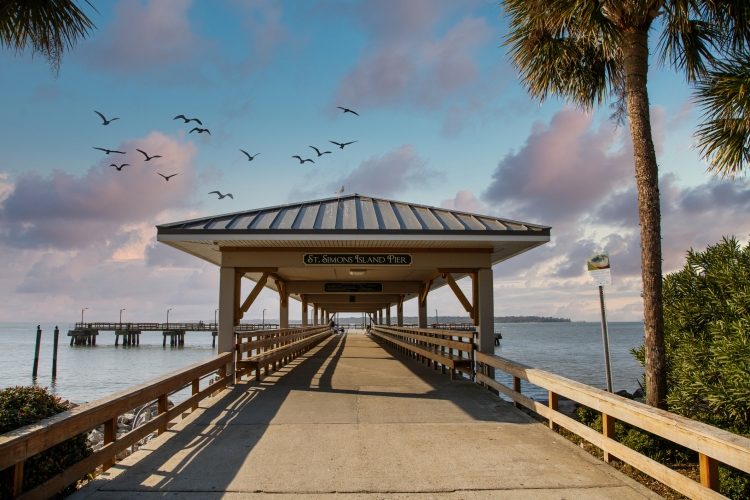 NOTE: St. Simons is a barrier island off Georgia’s Atlantic Coast midway between Savannah, Georgia, and Jacksonville, Florida. It is the largest of Georgia’s Golden Isles (along with Sea Island, Jekyll Island, and privately owned Little St. Simons Island). Visitors are drawn to the Island for its warm climate, beaches, outdoor activities, shops and restaurants, historical sites, and its natural environment. Originally inhabited by tribes of the Creek Nation, the area of South Georgia that includes St. Simons Island was contested by the Spaniards, English and French. After securing the Georgia colony, the English cultivated the land for rice and cotton plantations worked by large numbers of African slaves, who created the unique Gullah culture that survives to this day.

NOTE: Catfish are a diverse group of ray-finned fish. Named for their prominent barbels, which resemble a cat’s whiskers, catfish species live inland or in coastal waters of every continent except Antarctica.

ABOUT THE AUTHOR: David Bottoms was born in Canton, Georgia, in 1949. He earned an MA from the University of West Georgia and a PhD from Florida State University. His poetry collections include Otherworld, Underworld, Prayer Porch (2018), We Almost Disappear (2011), Waltzing through the Endtime (2004), Vagrant Grace (1999), Armored Hearts: Selected and New Poems (1995), and In a U-Haul North of Damascus (1982). His awards and honors include the Levinson Prize, an American Academy and Institute of Arts and Letters Award, an Ingram-Merrill Award, and fellowships from the National Endowment for the Arts and the Guggenheim Foundation. In 1979, Bottoms won the prestigious Walt Whitman Award from the Academy of American Poets for his first poetry collection Shooting Rats at the Bibb County Dump. Robert Penn Warren, the contest’s judge, described Bottoms as “a strong poet, and much of his strength emerges from the fact that he is temperamentally a realist. In his vision the actual world is not transformed but illuminated.” Poet laureate of Georgia from 2000 to 2012, Bottoms lives in Atlanta, Georgia, where he holds the John B. and Elena Diaz-Amos Distinguished Chair in English Letters at Georgia State University.