Far above the street scene graffiti of Paris,
I think of you, Monet, from the air up here
flying this sea foam sky, a shelf of waves
against a floor of mist breaking open
in patches of blue and white.

And I, like some devotee of impending
collisions in texture and transparency, dapple
words as Giverny expatriates might have once
on palettes a harvest of light, cultivating
a poetry of space en plein air.

I have looked, Monet, into the mirror into which
you must have many times glanced or long gazed,
your Orient prints awash in blue flirting the glass
with the constant movement of the sea
in which little else has changed.

You grew big bellied with age, tousle of hair thick
with gray, sight on the wane, canvases growing,
you padding through the long yawn of rooms
painted blue as lichen, yellow as sunflowers,
reflecting lilies afloat between the sky and the water.

But in your garden, beyond the rose blanketed fence,
those flowers brown now in a wilted July. I have looked,
Monet, into the mirror into which you must have
glanced or long gazed recollecting those lilies for me,
yet another tourist here.

They tell me the best part of your life was inhabiting
these gardens. And as the light fades, I cannot help
but wonder where it is next that I will go, and of my words,
what will they become stretching there
en plein air.

First appeared at Adirondack Review and in the author’s collection, Something About. 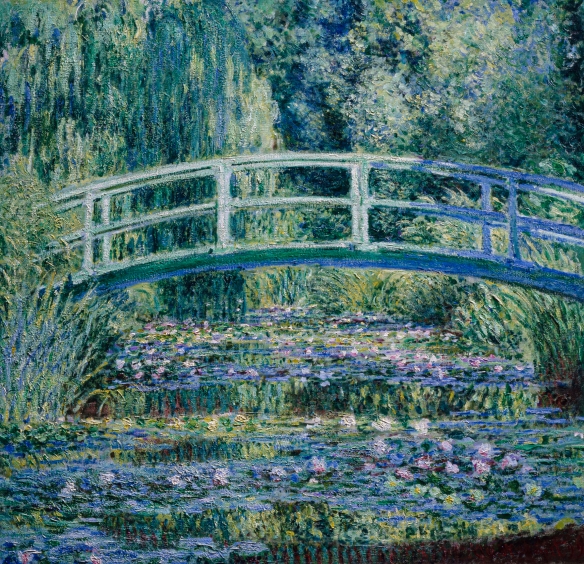 NOTE: Giverny is located on the right bank”of the river Seine at its confluence with the river Epte. Situated 50 miles west-northwest of Paris, in the province of Normandy, the village is best known as the location of Claude Monet‘s garden and home. In 1883, Monet and his family rented a house and gardens in Giverny. In 1890, he had enough money to buy the house and land outright and set out to create the magnificent gardens he wanted to paint. Monet lived and painted in Giverny from 1883 to his death, at age 86, in 1926. 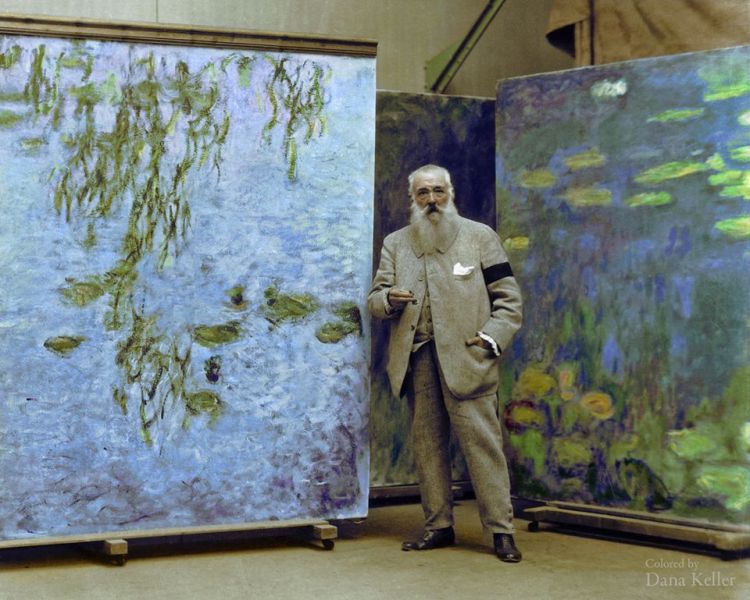 NOTE FROM THE AUTHOR: Giverny, a lovely train ride from Paris, is a favorite destination for many to see Monet’s home and gardens as it was for me. To walk where he walked during the most satisfying part of his life was to witness not only his Impressionism on canvas, but to imagine his everyday life “en plein air.” This poem was written on the plane ride home leaving Paris, incorporating qualities of the painting style through color and texture of words.

PHOTO: Claude Monet with some of his water lily paintings. Source: History in Color by Dana Keller.

ABOUT THE AUTHOR: Andrena Zawinski’s poetry has received numerous awards for lyricism, form, spirituality, and social concern, several of them Pushcart Prize nominations. Her latest book is Landings from Kelsay Books; others are Something About from Blue Light Press (a PEN Oakland Award) and Traveling in Reflected Light from Pig Iron Press (a Kenneth Patchen Prize), along with several chapbooks. Her poetry has previously appeared on Poetry and Places.