The Maine winter set in. Up until then, we would find isolated
places outdoors to make love, our two sleeping bags zipped together.
But when it got too cold for that our options were limited: neither
of us had a car; all of our friends lived in dorms, like us; we were
too young to get a motel room; and even if we had somewhere to go,
in Maine, circa 1962, you could be arrested for having unmarried sex.

Then we had a windfall. The family of Marsha, Phyllis’s roommate,
had a cabin on Mooselookmeguntic Lake, near Rangeley. “You can
use it this weekend,” Marsha said. “Pete”—her boyfriend—“and I
are kind of taking a break from each other. The cabin’s not heated,
and there’s no electricity, but it’s got a fireplace. Just make sure
you have enough wood. And don’t let the fire die out.”

Marsha dropped us off that Saturday night, lit a fire, said she’d be
back to get us in the morning, and drove away. Later, sated and
drowsy from wine, Phyllis and I fell asleep in our zipped-together
sleeping bags. We awoke to the terrible cold. The fire was out.
There was no other source of light. The only wood I could find was
hard and frozen. Soon there were no more matches.

We considered walking our way out. But walk where? We couldn’t
see, and the closest village, Oquossoc, was miles away. We figured
the sleeping bags were our best bet and huddled there like one body.
“We’ll die here,” Phyllis said. But she wasn’t crying, so I tried
not to. We spent the hours talking, whispering our regrets for what
we would never be or do, sharing our most intimate secrets.

A flashlight woke us up. “It’s freezing in here,” Marsha said
as she poured two mugs of hot coffee from a thermos. “I was
at a family friend’s house down the lake and got worried when I
didn’t see any smoke or firelight here. Damn lucky I came back.
What were you two thinking? This is Maine.”

The three of us walked to the car. Marsha drove and searched
for music on the radio. In the back seat, Phyllis and I covered
ourselves with the sleeping bags and held each other. Outside,
the black Rangeley night encompassed us. No one spoke.

PHOTO: Cabin and boathouse on Mooselookmeguntic Lake, western Maine, in winter, with frozen lake in background. Photo by tripadvisor.com, All Rights Reserved. 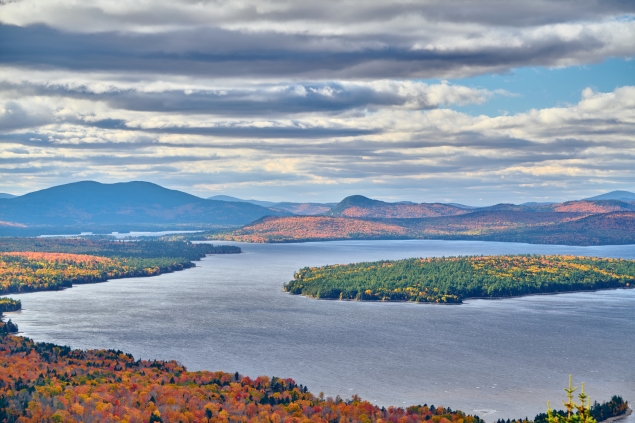 NOTE: Mooselookmeguntic Lake’s maximum depth is 132 feet and its surface area is 25.5 square miles, making it the fourth largest lake in Maine. Located just a few miles from the Appalachian Trail, the southern portion of the lake features two islands—Toothaker Island and Students Island. At 17 letters, Mooselookmeguntic, an Abnaki word for “moose feeding place,” is tied for the longest place name in the United States, along with Kleinfeltersville, Pennsylvania. Mooselookmeguntic Lake is the location of the action in Magic Thinks Big, an illustrated children’s book by Elisha Cooper, that features paintings of one of the islands in the lake, as well as a panorama of the lake.

PHOTO: Mooselookmeguntic Lake in autumn, with one of its two islands visible and Maine’s Western Mountains in the background. Photo by Haveseen, used by permission.

NOTE FROM THE AUTHOR: Mooselookmeguntic is one of six large lakes in the Rangeley Lakes region of western Maine, close to the state’s borders with New Hampshire and Quebec.  It’s a beautiful area, but bleak and forbidding in winter, when nighttime temperatures regularly drop below zero.  This was weather I was hardly prepared for as a first-year student, from New Jersey, at Bates College in the 1960s.

ABOUT THE AUTHOR: David Bachner is a retired college dean and professor, most recently at American University’s School of International Service. His research, teaching, and program administration focused on international education and intercultural relations, career-long specializations that were deeply influenced by his experiences as a university student in Japan and Peace Corps volunteer in Korea. David lives in Washington, DC, and is a frequent visitor to upstate New York, where he participates in an ongoing poetry workshop sponsored by Bright Hill Press and Literary Center of the Catskills. His recent publications include Capital Ironies: Washington, DC Poetry and Prose (Woodland Arts Editions, 2020) and four poems selected for Seeing Things: An Anthology of Poetry (Woodland Arts Editions, 2020).  Several of his haiku will be published in Sequestrum in 2021.

One thought on “Cold Cabin by David Bachner”