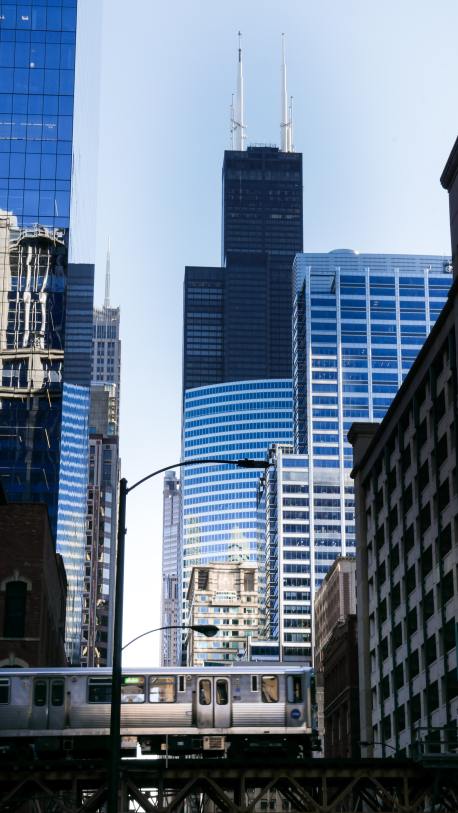 Loop towers loom behind their
gleam, and I can take you to the
parking lot just off Dearborn
Street where the Mayor and
reporters went down into
unflooded freight tunnels
(although that lot is likely gone
now, 26 years later).

Alex and I drove south to north
from city border to city border
through alleys of Chicago, world
alley capital. I saw a garage sale
chair and came back later to buy.

If you walk under the Loop and
follow the tracks west down Lake
Street — the soldierly tromp of
steel frames to oblivion — you
follow my brother’s walk as a
twelve-year-old through a Sunday
summer afternoon (through black
hot neighborhoods where young
men and old, grandmothers and
skip-ropers saw him as a gray
-dungareed shaman, magic blond
boy), up back stairs, to the
Leamington second floor, 52
years before self-murder.

Younger, he and I crawled
around the new-poured
foundation of a Washington
Boulevard building, so muddy
and our bikes, we had to walk
them home to the double-
spanking for the double of us
by Dad, on the porch, then
after the bath in bed.

Up Western from 79th Street, I
drove to Chicago (800 north)
and turned left, out to the
reporter job in Austin.  A
right turn, and, in a mile,
Ashland, where, thirty
years later, I walked with
Sandra the grit Chicago that
abraded her out to the
southwest and Mexico and
back southwest again, talking
of the dust on medical
implements in the drug store
window, dowdy Rexall, and,
a decade later, my son and
his wife live there in a duplex
with two fireplaces and never
saw the Rexall, gone now.
They can walk to work in
the Loop in looming towers.

NOTE: The Loop: The “L” Tracks that Shaped and Saved Chicago, Patrick T. Reardon’s fascinating history of Chicago’s downtown elevated tracks was published by Southern Illinois University Press on November 26, 2020. In the book, Reardon reveals how Chicago’s elevated Loop was built, gave its name to the downtown area, helped unify the city, saved the city’s economy, and was itself saved from destruction in the 1970s. This engaging book is required reading for travelers, and a reminder to never take our landmarks for granted.

PHOTO: The author at his Chicago Tribune desk (1980s). 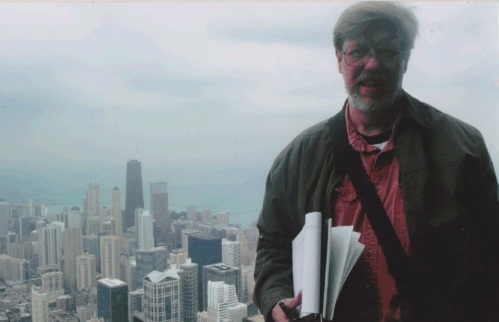 ABOUT THE AUTHOR: Patrick T. Reardon, who has been nominated three times for a Pushcart Prize, is the author of nine books, including the poetry collection Requiem for David  and the history The Loop: The “L” Tracks That Shaped and Saved Chicago. His poetry has appeared in Burningwood Literary Journal, Esthetic Apostle, Ground Fresh Thursday, Literary Orphans, Rhino, Spank the Carp, Main Street Rag, The Write Launch, Meat for Tea, Silver Birch Press, UCity Review, and Under a Warm Green Linden. His memoir in prose poems Puddin: The Autobiography of a Baby will be published in 2021 by Third World Press. Visit him at patricktreardon.com.  PHOTO: The author at the top of Sears Tower, Chicago (April 2004).

One thought on “Towers loom by Patrick T. Reardon”