Not one recognizable face on the plane,
in the airport John Deere memorabilia
beckon from the gift shop,
the state, empty of love.

Mother, spiffed up, her coiffure a pale shade
of apricot, Dad chewing on a bit of paper
to calm his nerves as he paces,
both long gone to graves. No welcoming.

Kathy, once the closest of sisters
Until the falling out,
Dead and buried too.
No apology awaits.

Me, a town girl, too soft for farm life,
no interest in hard labor, the science of agriculture,
dependence on the whims of weather,
the isolation, fled to the Isle of Manhattan.

Sixteen years absent, I return.
So much sky, oyster-grey clouds
tinged a bluish purple, weather in the wind.
Gravel kicks up dust, roads narrow and straight,
close to the corn.

I mourn as my father would to see paint peeling off
our former home. Out back the climbing roses
always blooming on my birthday, gone.
Gone too are the plum tree, the lilac and gooseberry bushes, the cherry tree.
The lightning bugs that flickered on summer nights?
Perhaps they still return at dusk.

I skipped through childhood in the Sunny Hill Cemetery
avoiding the grassy mounds so as not to disturb.
Death was always pending. The buckeye nuts,
thought to bring one luck, souvenirs,
now on my desk at home in Boston, at my fingertips. 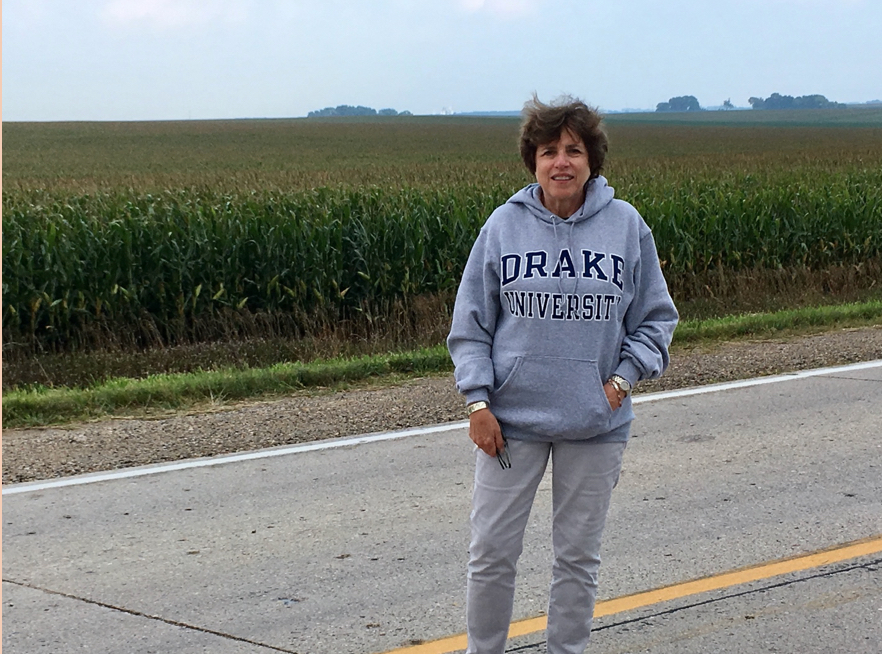 NOTE FROM THE AUTHOR: I returned to Iowa in 2016 for what I assumed would be a final goodbye to the geography of my youth. The itinerary: Six days; eight towns; seven hundred miles of highway. After writing an essay about the trip, I was inspired to compress the highlights into verse. The Drake University sweatshirt commemorates a 50th anniversary, and my choice to move on.

ABOUT THE AUTHOR: Janet Banks is a writer who is exploring the joys and challenges of aging in real time. Her personal essays have been published by Cognoscenti, The Rumpus, Entropy Magazine, Silver Birch Press, and Persimmon Tree among other on-line sites. Shortly after retiring from a corporate career, she was published in the Harvard Business Review. Her essay is included in HBR’s Summer 2020 Special Issue: “How to Lead in a Time of Crisis.” She began writing poetry during the pandemic of 2020.