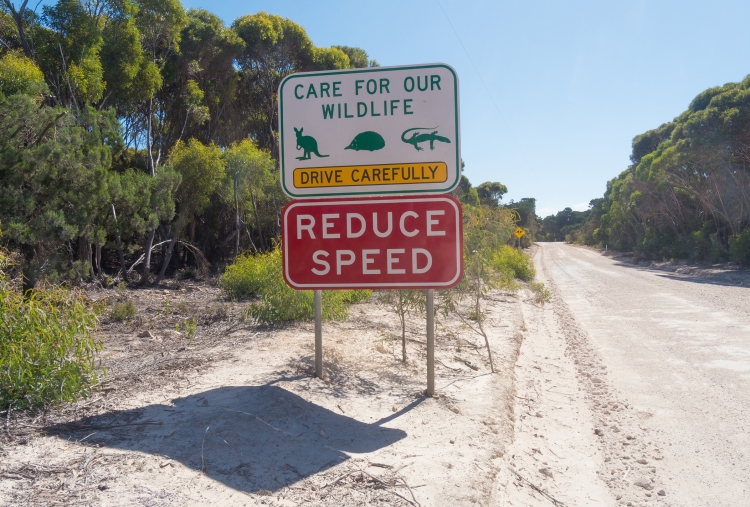 His tongue flicks out into the air.
As he swings his head toward me
and lifts his body,
I hurry into my car and slam the door.

This hot afternoon, his gait is lazy,
lone king of all the island,
of the bush and small towns,
the farms following the shoreline.

The attack to the tire—so fast—
a dialect of flashing teeth.
Even locked inside a Chevy in this foreign land,
I understand every word he says.
That mouth speaks the language of blood, of bone. 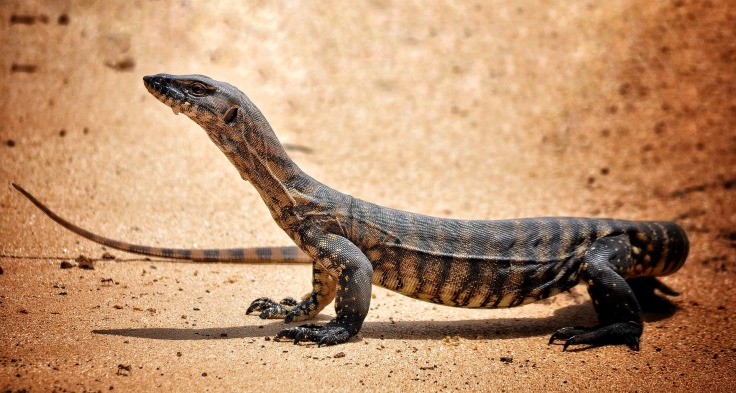 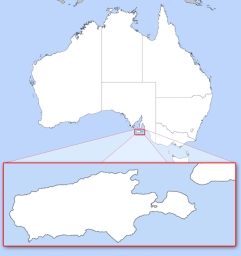 NOTE: Kangaroo Island, is Australia’s third-largest island, after Tasmania and Melville Island. It lies in the state of South Australia, 70 miles southwest of Adelaide.  The native population of Aboriginal Australians that once occupied the island disappeared from the archaeological record when the land became an island following the rising sea levels associated with the Last Glacial Period around 10,000 years ago. During the early 1800s, the island was intermittently settled by sealers and whalers, and from 1836 on was a permanent base during the British colonization of South Australia. The largest town, and the administrative centre, is Kingscote. The island has several nature reserves to protect the remnants of its natural vegetation and native animals, including Flinders Chase National Park at the western end.

PHOTO: Goanna, Kangaroo Island, Australia. Photo by Terri Sharp. NOTE: A goanna is any one of several species of lizards of the genus Varanus found in Australia and Southeast Asia. The goanna features prominently in Aboriginal mythology and Australian folklore.

MAP: Kangaroo Island, indicated in the red box, relative to mainland Australia, with the island shown in the inset at bottom. 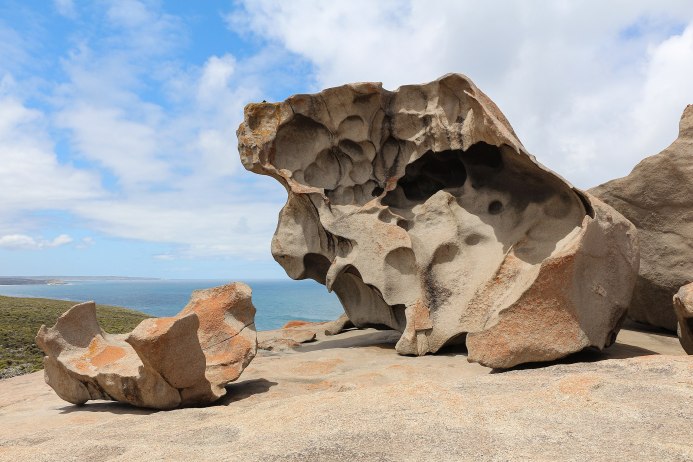 NOTE FROM THE AUTHOR: My husband and I were visiting friends in Adelaide and took a ferry south to Kangaroo Island where we stayed in a ranger’s hut in a national park.  Across the front door was an iron gate about two-and-a-half feet tall. We found out what it was for the first morning when we opened the door and discovered kangaroos, wallabies, and geese patiently waiting for breakfast. “Don’t feed them,” I said to my husband as he searched for food to give them. There were so many, it was hard to get away. We drove around the island and down the dirt road to the Remarkable Rocks at the beach and, upon returning, saw this large log across the road which turned out to be a goanna, a relative of the Komodo Dragon. Both are types of monitor lizards. 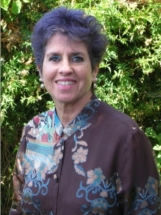 ABOUT THE AUTHOR: Rafaella Del Bourgo’s writing has appeared in journals such as Nimrod, The Jewish Women’s Literary Annual, The Adroit Journal, The Green Hills Literary Lantern, Caveat Lector, Puerto Del Sol, Rattle, Oberon, Spillway, and The Bitter Oleander. She has won many awards, including the Lullwater Prize for Poetry in 2003, and in 2006 the Helen Pappas Prize in Poetry and the New River Poets Award. In 2007, 2008, and 2013, she won first place in the Maggi Meyer Poetry Competition. The League of Minnesota Poets awarded her first place in 2009.  In 2010, she won the Alan Ginsberg Poetry Award and the Grandmother Earth Poetry Prize. She was awarded the Paumanok Prize for Poetry in 2012, and then won first place in the 2013 Northern Colorado Writers’ Poetry Contest. Finally, she won the Mudfish Poetry Prize for 2017. Her collection I Am Not Kissing You  was published by Small Poetry Press in 2003, and her chapbook, Inexplicable Business: Poems Domestic and Wild, was published in 2014 by Finishing Line Press. In 2012, she was one of 10 poets included in the anthology Chapter & Verse: Poems of Jewish Identity. She has traveled the world and lived in Tasmania and Hawaii.  She recently retired from teaching college-level English classes, and resides in Berkeley, California, with her husband.

One thought on “Rafaella Del Bourgo, Goanna on Kangaroo Island”