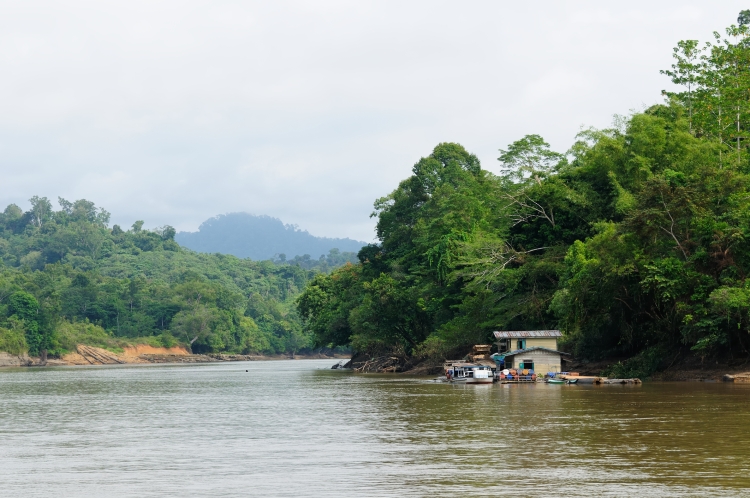 Somewhere between Melak and Tanjung Isuy
along Borneo’s Mahakam River
we entered the house of an old fisherman.
He led us into a sitting room
divided by a short board fence
protecting a shallow pool of water where,
against the wall,
beneath a crucifix of black ironwood,
steeped a crocodile,
peacefully alert, sure
we dare not disturb
the little girl asleep on its back,
her sweet snores
as zephyrs to its nape.

“My granddaughter and crocodile
are friends. Take picture yes.
You touch beast?”

He roused the child so Ferdy and I waded
to tap out fingers lightly on the scales
for our camera
entrusted to our host.
We shared the pictures
with the crocodile’s groggy playmate
who rubbed her eyes
to see Polaroid magic.

Ferdy interpreted the old man’s Indonesian for me:
“Eight year ago, I fish River
and catch baby crocodile in my net.
We eat not crocodile
when the fish are many,
so I throw it back in water,
but I hear cry like baby orang,
human baby.
I fish more, and again net bring crocodile
to my boat,
and again I hold its tail to throw in River,
when I see it cry. And then of course I know
crocodile is twin, is person.”

Ferdy explained for me:
“Country people drown second girl
when twins are born,
because twins are bad luck, even in Sumatra
with my Batak tribe still,
but sometimes baby fight to live
and gods help.
They turn baby into animal. The old man he say:
“‘So I take her home. We feed her
as we feed my granddaughter
who has same age.
She eat not food of crocodile,
only food of my granddaughter.’”
The old man laughed,
said to me in English,
“She is person. They are as sisters now yes.

“We call her Setia.” Faithfulness,
Ferdy translated. “And she thank my family
with luck and fortune.”

We left a gift of rupiah.
Aboard our boat again, I asked Ferdy
if he believes.

“The people believe,” he said.

“But you? You wear a university ring on your finger,
you are no animist. What do you
believe?”

I laughed, pressed him for logic, reason
beyond reasons.

And Ferdy bore me deeper down the Mahakam,
into the Borneo jungle. 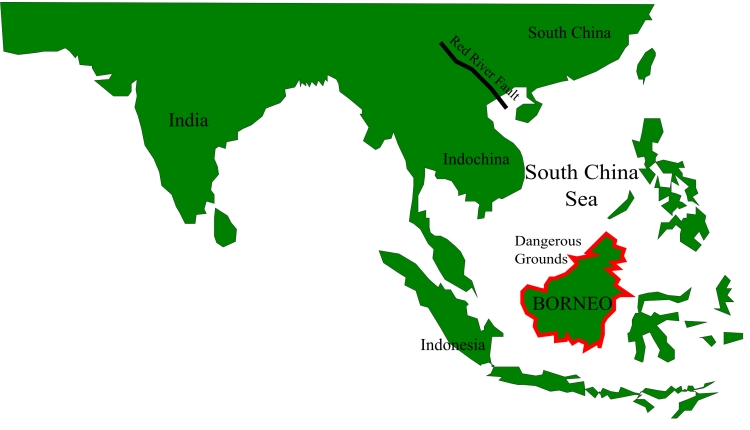 NOTE: Borneo is the third-largest island in the world and the largest in Asia. It is located north of Java, west of Sulawesi, and east of Sumatra. The island is politically divided among three countries: Malaysia and Brunei in the north, and Indonesia to the south. It is the only island in the world to be politically administered by three countries at once. Approximately 73% of the island is Indonesian territory. In the north, the East Malaysian states of Sabah and Sarawak make up about 26% of the island. The sovereign state of Brunei, located on the north coast, comprises about 1% of Borneo’s land area. A little more than half of the island is in the Northern Hemisphere, including Brunei and the Malaysian portion, while the Indonesian portion spans the Northern and Southern hemispheres.

NOTE FROM THE AUTHOR: One of the best trips my partner Ferdy and I ever took in Indonesia was a week’s journey on a motorboat, with pilot, guide, and cook, down the Mahakam River in Kalimantan, Indonesia’s piece of Borneo. I narrate exactly what I saw and heard at the most intriguing of our stops along the shore in the poem “Setia,” originally published in Pacific International 30 years ago!

PHOTO: Setia with visitors (from left) Ferdy and river guide, along with the little girl she lives with.

ABOUT THE AUTHOR: A native New Yorker, James Penha has lived for the past quarter-century in Indonesia. Nominated for Pushcart Prizes in fiction and poetry, his work has lately appeared in several anthologies: The View From Olympia (Half Moon Books, UK), Queers Who Don’t Quit (Queer Pack, EU), What We Talk About It When We Talk About It, (Darkhouse Books), Headcase, (Oxford UP), Lovejets (Squares and Rebels), and What Remains (Gelles-Cole). His essays have appeared in The New York Daily News and The New York Times. Penha edits The New Verse News, an online journal of current-events poetry. Twitter: @JamesPenha

One thought on “Setia by James Penha”