Under the awning,
in the Arasta Bazaar
we pawed through the display
in front of the silk shop—
dozens of soft, splendid scarves
shimmied in the breeze
calling to our eyes and fingers.
I spied among them, a silken swath
replete with feline images.

My daughter draped it
over her smooth shoulders.
The many smiling kitties
meowed sweetly in her ear,
(she assured me!),
singing the many joys
of ancestor cats
who, likely, in Sultan’s time
draped themselves around
shoulders of those who fed them.

As we chatted about the merits
of purchasing yet another scarf,
a large orange tabby
padded up and stopped
to stare at my lovely girl.
Was he resting with us
after a hard day of mousing
in Topkapi palace? Or
urging us to purchase
these likenesses of his kin?

The shopkeeper poked
his head out calling to us,
“Lovely!” he proclaimed,
“A bargain too.”
I bought the scarf .
Tabby purred approval.

NOTE: Istanbul, formerly known as Byzantium and Constantinople, is a transcontinental city in Eurasia, straddling the Bosporus Strait (which separates Europe and Asia) between the Sea of Marmara and the Black Sea. Its commercial and historical center lies on the European side and about a third of its population lives in suburbs on the Asian side of the Bosporus. With a total population of around 15 million residents in its metropolitan area, Istanbul is one of the world’s largest cities by population. Learn about the Arasta Bazaar at goturkeytourism.com. 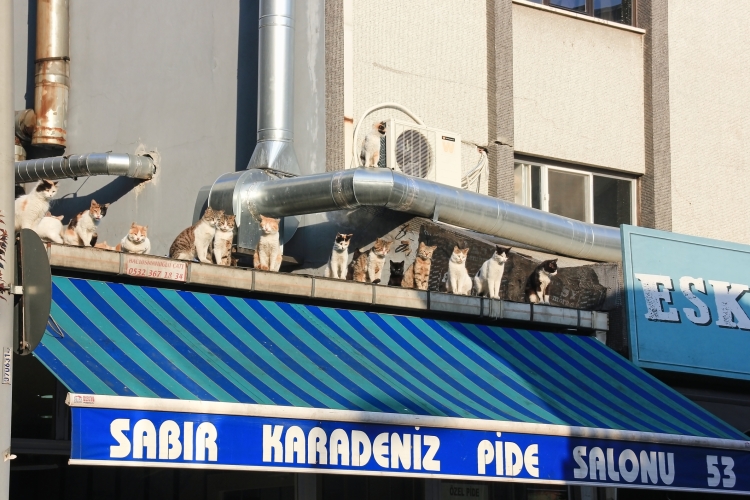 NOTE FROM THE AUTHOR:  Feral cats are beloved in Istanbul. People “adopt” several by feeding and caring for one or more—shopkeepers, too, often care for several cats near their stalls or stores.

NOTE: Colony of cats above an awning on a store in Istanbul, Turkey (May 2015). Photo by olgaturbina77, used by permission.

ABOUT THE AUTHOR: Joan Leotta is a writer and story performer. Her poems have appeared in Silver Birch, When Women Write, Verse Visual, Verse Virtual, The Ekphrastic Review, Yassou, Stanzaic Stylings, read at the Ashmolean, and have won an award at the Wilda Morris Challenge. Her first chapbook, Languid Lusciousness with Lemon, is available from Finishing Line Press. Her essays, articles, and stories are also widely published. On stage, she presents folk and personal tales of food, family, and strong women. She loves to walk the beach, cook, and browse through her many travel photos. Visit her at joanleotta.wordpress.com and on Facebook.