Leaving Algeciras in 1971
by Diane Kendig

We could catch a boat from there to Ceuta for seventy-five cents,
we said to each other in the school lobby in Segovia,
we could go to Africa for less than a dollar, once we got to Algeciras.
I had only the hundred an uncle had given me to last four months.
We arrived late, would have to wait for the boat in the early morning,
needed to stay near shore in the sailors’ hostel, the filth of which
I’d never seen. Mark reeled out of the bathroom, said, “Do not
go in there. Do Not.” I wondered how my bladder
would make the night, and I do not remember now how it did.

I remember the ride, the suffusing sun of Spain,
that light fantastic to a twenty-one-year old Midwesterner, so
stupid with it, for months I’d burned and tanned and burned more,
on board also a South American family shifting languages
and dialects, and even their seven-year old girl knew
them all and chattered to me in English too.

Then a lot of Berbers were loaded on, all wearing off-white,
robes and turbans, screamed at to move to the back of the boat,
herded, crammed in, waiting like us but not like us
to get to Africa.

PHOTO: Ferry traveling the Bay of Gibraltar from Algeciras, Spain, to Ceuta, a Spanish autonomous city on the north coast of Africa, with the Rock of Gibraltar in the background. 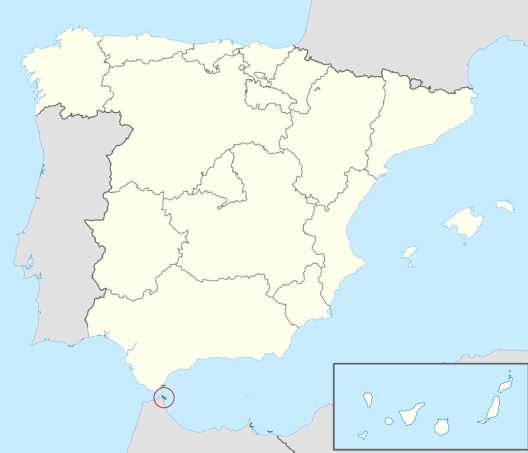 NOTE: Algeciras is a port city in the south of Andalusia, Spain, and the largest city on the Bay of Gibraltar. Ceuta is a Spanish autonomous city on the north coast of Africa. Bordered by Morocco, it lies along the boundary between the Mediterranean Sea and the Atlantic Ocean, and is one of nine populated Spanish territories in Africa, along with Melilla. On March 14, 1995, Statutes of Autonomy were passed for both Ceuta and Melilla. While Spanish is the official language, Darija Arabic is also spoken by the 40–50% of the population who are of Moroccan origin.

IMAGE: The circled area on the map shows the approximate location of Algeciras, Spain, and Ceuta, a Spanish autonomous city on mainland Africa. The distance is about 19 miles, a trip that takes approximately 75 minutes. Ticket price as of 2021 is about $37.

NOTE FROM THE AUTHOR: This poem is a memory I have from a trip to Africa in 1971. It was inspired by a poem about traveling to Algeciras in Philip Levine’s final book, The Last Shift (2018), released after his death in 2015. And, checking online, I see that the ferry that goes from Algeciras to Ceuta is still going and I hope to take that trip one more time, after the healing begins. I could not verify the cost of the ferry, but I very much suspect that it is more than the 75 cents that we paid for it.

PHOTO: Welcome to Ceuta sign, north coast of Africa, showing the flags of Ceuta, Spain, and the European Union. Photo by the Red Hat of Pat Ferrick, used by permission.

ABOUT THE AUTHOR: Diane Kendig has published four poetry collections, most recently Prison Terms and The Places We Find Ourselves. She also co-edited the anthology, In the Company of Russell Atkins and translated Nicaraguan poetry for A Pencil to Write Your Name. Her prose and poetry have appeared in anthologies and in journals such as Blueline, Under the Sun, and J Journal. Her book Woman with a Fan, poems and essays on the Spanish painter Maria Blanchard, will be released in June 2021 with Shanti Arts. Kendig curates the Cuyahoga County Public Library weblog, “Read + Write: 30 Days of Poetry,” and teaches writing in prison. Visit her at dianekendig.com.

PHOTO: The author and her Scottie, Robert Burns Beaudig.