I think it is interesting
though not exactly amusing
how we go from day to day
with no money. How do we
do it, friends ask, suspecting
we really have some stash
stacked away somewhere.
But we certainly do not
and we also do not know
how we do it either.
You sure are lucky,
some of our friends say. I am
none too sure of that though,
as I wait for the winning
lottery numbers to be announced
on CKLW. Thursday in Detroit
is the day of dreams. We have
been dreaming of a place
in the country lately and I’m
none too sure that is very healthy.
And speaking of health that’s
also been a problem that probably
has something to do with no money,
since we’ve all been sick lately,
taking turns politely of course.
Could you bring me some more
tea one of us will ask,
and the other will.
In between the coughing and
worrying our thoughts
have often turned to crime.
We seriously wonder how we can
get away with a bundle with
as little risk as possible.
Last week we took our last
$12 out of the bank
and noticed how much more
they had there though
we had none. Of course
we wouldn’t rob that bank,
they know us there
as the ones who bring
the rolls of pennies in.
And just yesterday they
fish-eyed us for trying
to cash our son’s xmas bond
from his grandparents
after only one month.
So we wouldn’t try to rob that bank,
but I do know of one up north
that may be possible. . .
I know this just seems like
romantic dreaming
but I practically make a career
of reading detective stories,
and God knows, I have no other.
Anyway if the right opportunity
comes along, we are more
than ready to meet it.
But this is a time of waiting,
the I Ching says, though it does
not say how we are to eat
while waiting. And soon
we will have another mouth to feed—
Ann now in her seventh month,
and that is often in our thoughts.
Besides all that we are both
over thirty, artist and poet,
still waiting to cross the great water.
Meanwhile, day after day,
there is still Detroit
to be dealt with — a small pond
says our friend Snee.
Big fish we used to answer him,
but that was a while back.
Now we think maybe Lake Erie
is the great water referred to
in the I Ching, and if we wait
long enough we can
walk across — to Buffalo
or Cleveland. In a healthy person,
says the philosopher, self-pity
can be a forerunner to action:
once the problem is seen clearly,
a solution may be found at hand.
And as I said, I think it is interesting
though not exactly amusing.

SOURCE: “January in Detroit or Search for Tomorrow Starring Ken and Ann” from Big Enigmas (Past Tents Press, 1991). Copyright ©1991 by Ken Mikolowski. 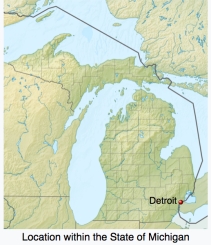 NOTE: Detroit is the largest and most-populous city in Michigan, with a metropolitan area that’s home to 4.3 million people. The city was founded on July 24, 1701, by the French explorer and nobleman Antoine de la Mothe, sieur de Cadillac. The word “detroit” is French for “strait,” a reference to the Detroit River, which flows west and south for 24 nautical miles from Lake St. Clair to Lake Erie as a strait in the Great Lakes system. Detroit and its neighboring Canadian city, Windsor, are connected through a highway tunnel, railway  tunnel, and the Ambassador Bridge. The Detroit River International Wildlife Refuge is the only international wildlife preserve in North America, and is uniquely located in the heart of a major metropolitan area. Detroit is best known as the center of the U.S. automobile industry, which originated in the early 1900s and led to the city’s increased population and prosperity. In the late 20th Century, plant closures resulted in the loss of jobs and decreased population.  A leading influence in art and culture, particularly music, Detroit has given rise to the genres of Motown and techno, and has played a significant role in the development of jazz, hip-hop, rock, and punk. Since the 2000s, conservation efforts have led to large-scale revitalizations, including the restoration of historic theaters and entertainment venues, high-rise renovations, new sports stadiums, and a riverfront revitalization project. In recent years, the population of Downtown Detroit, Midtown Detroit, and other neighborhoods has increased. In 2015, Detroit was named a “City of Design” by UNESCO, the first U.S. city to receive that designation, which recognizes creativity as a major factor in a city’s urban development.

ABOUT THE AUTHOR: Born and raised in Detroit, poet and editor Ken Mikolowski earned a BA at Wayne State University. He is the author of several poetry collections, including Big Enigmas (1991), Little Mysteries (1979), and Thank You Call Again (1973). During the 1960s Mikolowski founded the Alternative Press in Detroit’s Cass Corridor with his late wife, the painter Ann Mikolowski. As the press’s editor for 30 years, Mikolowski published—as unbound letterpress-printed mail art—the work of local Detroit poets as well as nationally recognized Beat and Black Mountain poets, including Charles Bukowski and Allen Ginsberg. In 1983 the Mikolowskis’ work with the Alternative Press was recognized with an Arts Achievement Award from Wayne State University. In the catalog for the exhibit Time and Place: Art of Detroit’s Cass Corridor at the Elaine L. Jacob Gallery, Mikolowski discussed his motivation for starting a poetry press in post-riot Detroit: “We lived in ‘one of the worst cities in the history of the world’ and we were survivors, but more than that we reveled in it, and we swaggered when we walked. We didn’t own much, but we owned this, and we made art with it.” From 1977-2015, Mikolowski taught at the University of Michigan, and currently serves as Lecturer Emeritus, Creative Writing.