Some kind of nut
by Charles Bukowski

the best Christmas I can remember
I was in a tiny room in
Philadelphia
and I pulled down all the
shades
and went to bed
and pulled up the
covers.

and I believe that I felt better
than anybody in that
city
and almost anybody
in any of the
cities.

and I celebrated New Year’s
Eve in the same
manner.

NOTE: Charles Bukowski is best known as a Los Angeles writer and poet. But from 1944-1947, he lived in Philadelphia, Pennsylvania, where he worked at Fairmount Motors (1501 Fairmount St), the Nabisco plant (1325 West Glenwood Ave),  and at the Snap-On Tool warehouse (1601 Fairmount Ave). While in Philadelphia, Bukowski lived at a variety of North Philly and Fairmount addresses, including: 3545 N Camac St, 1623 Green St, 603 N. 17th St, and 2020 Mt. Vernon St. On July 22, 1944, with World War II raging, 23-year-old Charles Bukowski was arrested by F.B.I. agents in Philadelphia on suspicion of draft evasion. The United States was then at war with Germany and many Germans and German-Americans in the U.S. were suspected of disloyalty—and Bukowski’s background troubled the U.S. authorities. (Bukowski was born in Andernach, Germany, on August 16, 1920, and emigrated with his parents to the U.S. on April 29, 1923.) After his arrest, Bukowski was held for 17 days in Philadelphia’s Moyamensing Prison. Sixteen days later, he failed a psychological examination that was part of his mandatory military entrance physical test and was given a Selective Service Classification of 4-F (unfit for military service).  (Source: wikipedia.org)

PHOTO: Fairmount Motors auto showroom (left), where Charles Bukowski worked for 65 cents per hour after moving to Philadelphia in 1944. The building was designed by Samuel Brian Baylinson in 1929, and in 2015 the city’s Historic Commission agreed to list the building in the Philadelphia Register of Historic Places for its distinctive Art Deco architecture.  (Photo, circa 1930s: Philadelphia Historical Society, all rights reserved) 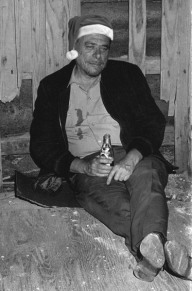 ABOUT THE AUTHOR: Charles Bukowski was a prolific writer who used his poetry and prose to depict his life in working class America. “Without trying to make himself look good, much less heroic, Bukowski writes with a nothing-to-lose truthfulness which sets him apart from most other ‘autobiographical’ novelists and poets,” commented Stephen Kessler in the San Francisco Review of Books, adding: “Firmly in the American tradition of the maverick, Bukowski writes with no apologies from the frayed edge of society.” Michael Lally in Village Voice maintained that “Bukowski is…a phenomenon. He has established himself as a writer with a consistent and insistent style based on what he projects as his ‘personality,’ the result of hard, intense living.” Bukowski wrote more than forty books of poetry, prose and novels. He died in 1994 at age 74, and his work continues to give hope to the down-and-out, depressed, and downtrodden. We celebrate Charles Bukowski’s life and work on this Christmas Day 2020, during his centennial year. It is widely believed that Bukowski’s writing has given hope to the hopeless, saving many lives—especially among those who feel isolated and alone during the holidays. We take off our Santa hat to you, Hank! Cheers!

One thought on “Some kind of nut by Charles Bukowski”