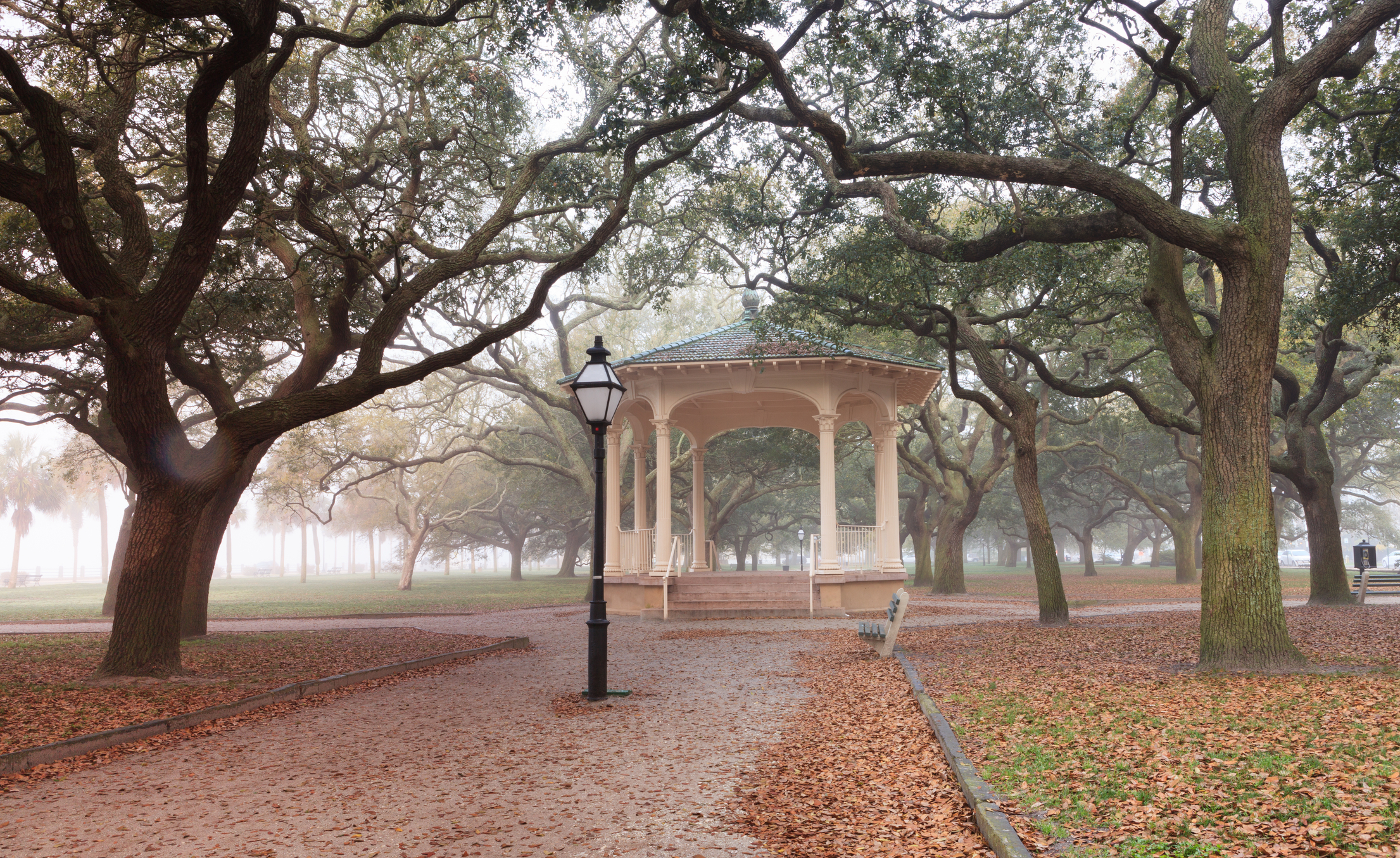 Ghosts in the Garden
Epistle from The Battery, Charleston, South Carolina
by Andrena Zawinski

From the city carriage house, from my window inside the piazza,
from here I think I hear them. And there are two of them moving
about below inside a shuffle of whispers. There is a girlish burst
of giggles lilting Gullah tongues. I imagine them there, charmed
by the night, by desire, hooked in the dark into the crooks
of the arms of their own cavaliers, these brown-skinned girls
in genteel Charleston, girls dreaming twilit promenades
wide enough for sweeps of hooped-skirt fashions in from London,
ample as their gentlemen’s gusty promises sweeping the walks,
promises that could lift them swift as evening wind, lift them
with the sudden surprise of thick and musky jasmine sailing in,
their fancies flitting like patches of moonlight fluttering across
oyster shells ground in on the walk, the young heart drifting
with dream and desire.

But at the old Round Church where I propped myself earlier today
in the bright of day against a tree to watch the shadow of a cat lilt
plot to plot, against a sky rumbling low with Charleston’s incoming
afternoon rain–this haunts me now: I think I heard
a gravedigger’s groan, his shovel hit the ground, imagined him
back bent weary, burying six years of smallpox and yellow fever,
a hurricane, the Yamassee raids, all the nuisances of a noisy history.

And now here above this garden of ghosts dark has fallen into,
my thoughts sweep like bees loosened from night corners in a wild
thrum, darting between here and there, between patchy moonlight
and shadows. And I turn over these clamorous thoughts, try
to bury them in the deep plush of my bed in the room above where
horses once stabled. Where I think I hear a bridled mare, the clips
and clomps of her impatient hooves haunting the night. The night
in which a skirt was hooked in the narrow between the kitchen
and main house, when to be a man of property was enough license
to take a girl against her will, tether her with the fury of his passion,
as someone listened above the garden gate carved in hearts afire,
as someone pressed her hands across her ears, slipped inside
a heavy spell of jasmine wrapping the night, slipped into sleep,
into the unbearable inevitability of her own silence.

SOURCE: “Ghosts in the Garden” appears in the author’s collection Something About (Blue Light Press San Francisco)

NOTE: Charleston is the largest city in South Carolina, with a population in September 2020 of 138,458. The city lies just south of the geographical midpoint of South Carolina’s coastline, on Charleston Harbor, an inlet of the Atlantic Ocean.  Founded in 1670 as Charles Town (later changed to Charleston), to honor King Charles II of England, it was one of the key cities in the British colonization of the Americas. Charles Town played a major role in the slave trade, which laid the foundation for the city’s size and wealth, and was dominated by a slavocracy of plantation owners and slave traders. Historians estimate that nearly half of all Africans brought to America arrived in Charleston. In 2018, the city formally apologized for its role in the American slave trade after CNN noted that slavery “riddles the history” of Charleston. Known for its strong tourism industry, in 2016 Travel + Leisure Magazine ranked Charleston as the best city in the world. Over the last few decades, the magazine has ranked Charleston the best city in the United States based on travel reviews from readers.

ABOUT THE AUTHOR: Andrena Zawinski’s latest poetry collection is Landings from Kelsay Books. Others are Something About from Blue Light Press, a PEN Oakland Award and Traveling in Reflected Light from Pig Iron Press, a Kenneth Patchen Prize. She also has several smaller collections. Her poems have received accolades for free verse, form, lyricism, spirituality, and social concern, and have appeared in Aolean Harp, Artemis, Blue Collar Review, Bryant Literary Review, Caesura, Plainsongs, Progressive Magazine, Rattle, and others with work online at Women’s Voices for Change, Writing in a Woman’s Voice, Verse Daily, and elsewhere. Veteran teacher of writing and feminist activist, she founded and runs the San Francisco Bay Area Women’s Poetry Salon and is longstanding Features Editor at Poetry Magazine.