The scratch of our match
brings flame to the thin wick.
Delicate wax
drips on our fingers
as we search for
just the right spot
to place the candle,
lit for friends who are sick.
Lightly burned
by beeswax, our
fingertips
finally secure a place
for our light
among the others.
Pulling back
from the array of offerings
that same wax,
cooling now,
assuages the pain in our
fingers, pleased as
we see our candle flickering but
holding our petitions in the light.

PHOTO: Basilica of Our Lady of the Rosary, Fátima, Portugal, a Roman Catholic church  in the Sanctuary of Fátima in Cova da Iria, in the civil parish of Fátima, in the municipality of Ourém in central Portugal. Photo by LhcCoutinho, used by permission. 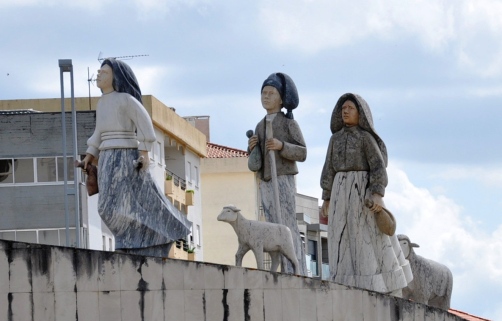 NOTE: Fátima, Portugal, has been permanently associated with the Marian apparitions  witnessed by three local shepherd children at the Cova da Iria in 1917. The Catholic Church later recognized these events as “worthy of belief”. A small chapel was built at the site of the apparition, now known as Our Lady of Fátima, beginning in 1918, and a statue installed. The chapel and statue have since been enclosed within the Sanctuary of Our Lady of Fátima, a shrine complex containing two minor basilicas. Associated facilities for pilgrims, including a hotel and medical center, have also been built within and around the Sanctuary. The site has become an international destination for religious tourists, hosting six to eight million pilgrims yearly.

PHOTO: Monument to shepherds Lúcia Santos, Jacinta Marto, and Francisco Marto, the three children in Fátima, Portugal, who reported their 1917 visitations from the Virgin Mary. Photo by János Korom Dr., used by permission.

NOTE FROM THE AUTHOR: This poem is from a 2016 trip to Portugal. I had always wanted to go to Fátima—The nuns showed us movies about it on rainy days when I was a young girl at Ursuline Academy in Pittsburgh, Pennsylvania.

ABOUT THE AUTHOR: Joan Leotta is a writer and story performer. Her poems have appeared in Silver Birch, When Women Write, Verse Visual, Verse Virtual, The Ekphrastic Review, Yassou, Stanzaic Stylings, read at the Ashmolean, and have won an award at the Wilda Morris Challenge. Her first chapbook, Languid Lusciousness with Lemon, is available from Finishing Line Press. Her essays, articles, and stories are also widely published. On stage, she presents folk and personal tales of food, family, and strong women. She loves to walk the beach, cook, and browse through her many travel photos. Visit her at joanleotta.wordpress.com and on Facebook.

One thought on “Candle Lighting at Fátima by Joan Leotta”