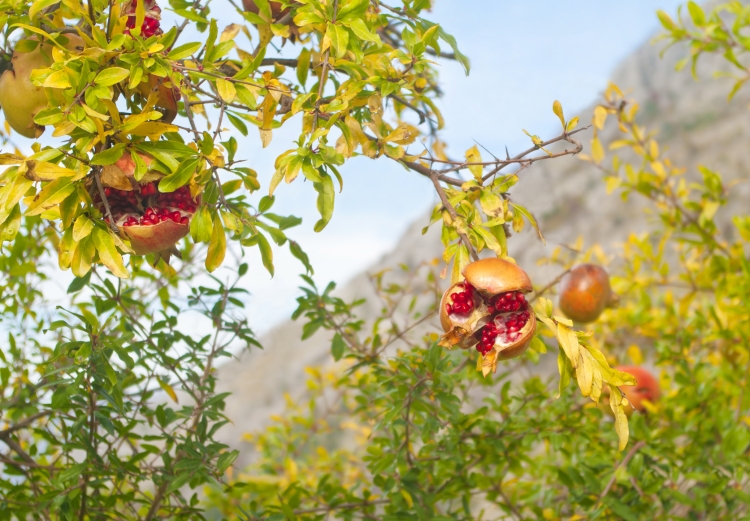 The Pomegranate
by Kahlil Gibran

Once when I was living in the heart of a pomegranate, I heard a seed
saying, “Someday I shall become a tree, and the wind will sing in
my branches, and the sun will dance on my leaves, and I shall be
strong and beautiful through all the seasons.”

Then another seed spoke and said, “When I was as young as you, I
too held such views; but now that I can weigh and measure things,
I see that my hopes were vain.”

And a third seed spoke also, “I see in us nothing that promises so
great a future.”

And a fourth said, “But what a mockery our life would be, without
a greater future!”

Said a fifth, “Why dispute what we shall be, when we know not even
what we are.”

But a sixth replied, “Whatever we are, that we shall continue to
be.”

And a seventh said, “I have such a clear idea how everything will
be, but I cannot put it into words.”

Then an eight spoke—and a ninth—and a tenth—and then many—until
all were speaking, and I could distinguish nothing for the many
voices.

And so I moved that very day into the heart of a quince, where the
seeds are few and almost silent.

ABOUT THE AUTHOR: Khalil Gibran (1883-1931) was a Lebanese-American writer, poet and visual artist. He is best known as the author of The Prophet, first published in the United States in 1923—a collection of 26 prose poems that has sold over nine million copies in the U.S.  and has been translated into 100 languages. In 1895, Gibran immigrated with his mother and siblings to the United States, settling in Boston, Massachusetts. At age 15, he was sent back to his native land to enroll at the Collège de la Sagesse in Beirut. Gibran studied art in Paris from 1908 to 1910, then settled in New York. His first book in English, The Madman, was published by Alfred A. Knopf in 1918. After his death at age 48, Gibran’s body was transferred to his birth village of Bsharri (in present-day Lebanon), to which he had bequeathed all future royalties on his books, and where a museum dedicated to his works now stands.