The Starlings
by Jesper Svenbro

Translated from the Swedish by John Matthias and Lars-Håkan Svensson

Late one afternoon in October
I hear them for the first time:
loud-voiced palavering, whistles, murmurs,
quarrels, bickering and warbling, croaking and chatter
in the high plane trees of the street.
The leaves are all turning yellow this time of year,
causing huge yellow sunlit rooms
to appear at the level of the fifth and sixth floors
opposite the barracks, where the tram turns off
from the Via delle Milizie.
Solid branches, twigs, and perches:
every bit of space is taken up in this parliament of starlings!
They are tightly bunched together there among the leaves;
and the hundreds of thousands of starlings
that perform their flying exercises
against the backdrop of the evening’s mass of motionless cloud
will surely soon have lost their places:
there are myriads of swarming punctuation marks out there,
starlings flying in formation,
sudden sharp turns, steep ascents,
swarm on delightful swarm
against a rosy cloud bank in the east.
The October evening is cool.
The shop windows of the Via Ottaviano are shining.
And the starlings are chattering, quarreling and laughing,
whispering and quietly enjoying themselves, when suddenly
a blustering as of ten thousand pairs of sharp-edged scissors
passes through the republic of the plains—
it is as though an alarm had sounded,
heard as an echo over the muffled traffic.
Soon the darkness of night will fall.
But the starlings up there won’t stop talking,
they move together, push one another, chatter and flit.
Virgil must have had them in mind when somewhere he likens
the souls of the deceased to flights of birds
which toward sundown
abandon the mountains and gather in high trees.
I seem to be standing in an Underworld
in the midst of a swarm of birds.
The block is Virgilian; the street is crossed
by the Viale Giulio Cesare,
where you lived
for some time before you died.
That’s why I am stopping here.
The souls of the dead have gathered in the trees.
Their number is incredible, suddenly it seems ghastly;
is this what it will be like?
For a moment I am a prisoner
of the poem I am writing.
There must be an exit.
The soldier coming up to me
has noticed that I have been standing
for quite some time looking up into the foliage—
into the darkness of feathers, bird’s eyes, and beaks.
The peasant boy inside him apprises me
of the fact that starlings come in vast migrations
“from Poland and Russia”
to spend the winter in the south:
“And things go very well for them!
In the daytime they fly out to the countryside
and spend the night in here,”
he explains with great amusement, turning his gaze
up toward the swarm of birds. Their anxiety seems to have ceased;
in just a moment they all seem to have fallen asleep.
Only single chirps and clucks are heard
from starlings talking in their sleep.
What are they dreaming of? Ten thousand starlings are dreaming in the
darkness
about the sunlight over the fields.
As for myself, I am thinking of the tranquility
in certain restaurants in the countryside,
in the Albano Mountains and on the Campagna—
the tranquility at noon on a sunny day in October.
I am filled with the clarity of the fall day.
And am touched by something immeasurable, transparent,
which I cannot describe at first
but must be everything we never said to each other.
There are so many things I’d like to say.
How shall I be able to speak?
Today you are not shade, you are light.
And in the poem I am writing you will be my guest.
We are going to talk about Digenís Akrítas,
the Byzantine heroic poem
with the strangely compelling rhythm;
and since the manuscript of the poem
is preserved in the monastery at Grottaferrata
I shall order wine from Grottaferrata,
golden and shimmering in its carafe;
we shall talk about the miraculously translucent autumn poem by Petronius
which appears first in Ekelöf’s Elective Affinities;
and about Ekelöf’s poems, to which you devoted such attention.
Did Ekelöf ever come to Grottaferrata?
I seem to detect your lively gaze.
And we shall see how the starlings come flying
across the fields in teeming swarms.
They will come from Rome and spend the day out here
where they will eat snails, worms, and seeds
and suddenly they will fly up from a field
as at a given signal
and make us look into the sun. 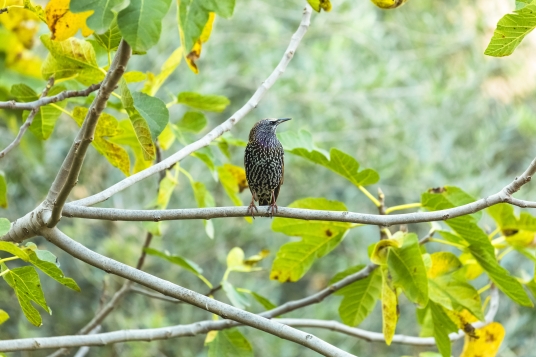 NOTE: (From italiannotes.com) Millions of Starlings breed in Northern Europe in the summer and return to the countries around the Mediterranean Sea in the winter months. These migratory birds prefer to nest in town due to the urban heat and abundant roosting spots in city parks and trees. By day, starlings fly to the countryside to find food in vineyards and olive groves. A downside to this avian invasion is noise and waste, but there is an upside — the magical sight of large flocks of starlings flying in formation, a phenomenon called murmuration. Watch a National Geographic video of starling murmurations here.

ABOUT THE AUTHOR: Jesper Svenbro was educated at Lund University, where he was awarded a Ph.D. in 1976 for his dissertation La parole et le marbre: aux origines de la poétique grecque, on the origin of ancient Greek poetics. He is director of research at Centre Louis Gernet (CRCSA) in Paris. In 2006, he was elected a member of the Swedish Academy, succeeding the poet Östen Sjöstrand in seat 8. His poetry has been translated into English by the Swedish critic Lars-Håkan Svensson and the American poet John Matthias, and appears in Poetry Magazine and his collection The Three-Toed Gull: Selected Poems  (Northwestern University Press, 2013).