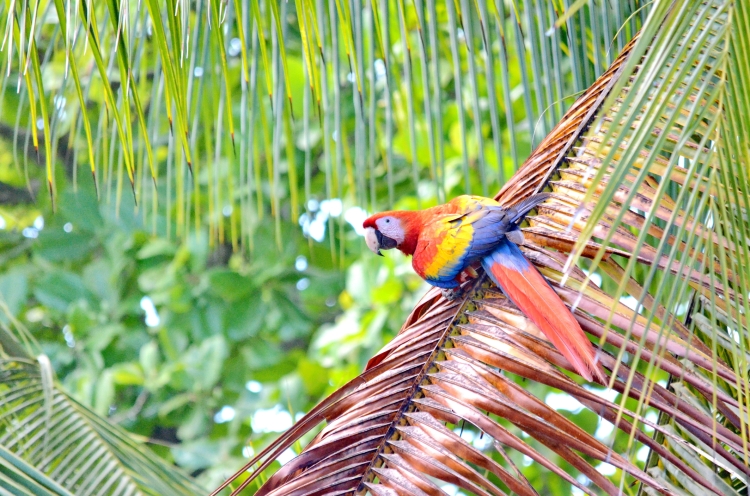 On the Osa
by Anne Whitehouse

Into the forest, we follow a river
up to a waterfall. Slowly twirling,
green and yellow, leaves fall
in the heavy air, and from on high
a toucan trills thrillingly.
Perched on a dead branch,
backlit by the sky,
we glimpse the bird in profile.

Spider monkeys noisily eat
berries by the handful,
dropping refuse on the ground,
scattering, chattering—
and everywhere the emphasis on color—
a lizard called silvana with a stripe
of neon green down its back,
river crayfish with claws of deep blue,
but surely there is nothing bluer
than the blue Morphos butterflies
seeking refuge in the cool shade
that hovers above the river,
their fluttering wings like scraps of sky.

After noon, stillness shimmers.
Scarlet Macaws fly up and down in pairs,
tracing vees side by side,
long feathery tails curving gracefully.
Like the heat, their harsh cries are an assault.
The Kingfisher hides in the shadows of the lagoon;
Cherrie’s Tanagers flit in the jacaranda.

Rocky ledges and loose stones
magnify the echo of the crashing surf.
I float in the warm waters of the Golfo Dulce
where the tide ripples onto a beach,
almost asleep, as in a bath.
Dreaming of ice, waiting for nightfall,
I run across the burning sand.

I met a woman in flight from her previous life,
foreigner to this tropical coast,
younger than I but no longer young.
The connection we shared
was not quite friendship.

Bare-footed, in her orange caftan,
she sang to her warped guitar,
Listen to the rain, change your mind and dreams.
Eat saucy things with your fingers,
share star fruit and sacred space.

I was born in New York
and grew up all over the world,
inflicted with a permanent sense
of wanderlust. In my city nights,
I shut down bars at the open mike.
Now I wake with howler monkeys
and go to sleep when darkness falls. 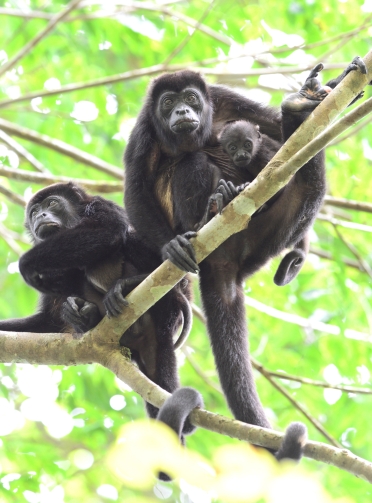 NOTE: The Osa Peninsula  is located in southwestern Costa Rica, with the Pacific Ocean to the west and the Golfo Dulce to the east. The peninsula is home to at least half of all species living in Costa Rica. The main town on the peninsula is Puerto Jimenez provides access to Corcovado National Park, which National Geographic has called “the most biologically intense place on Earth in terms of biodiversity.”

NOTE FROM THE AUTHOR: “On the Osa” was inspired by a trip four years ago to the Osa peninsula of Costa Rica.

ABOUT THE AUTHOR: Anne Whitehouse is the author of seven poetry collections, most recently Outside from the Inside, recently released by Dos Madres Press, as well as a novel, Fall Love..

One thought on “On the Osa by Anne Whitehouse”